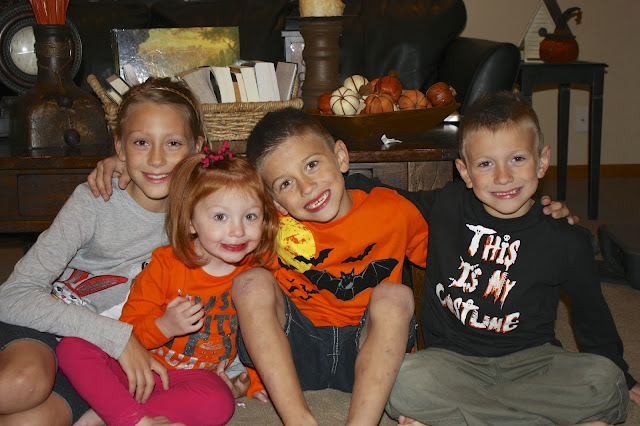 Is it even appropriate to post after almost 2 years of nothing?!?! That is pathetic I know! Thought I would share the most current picture of these kiddos with their new Halloween shirts.
Posted by Finkleas at 3:05 PM 1 comments

Yet another year that we are too poor for Christmas cards, however we decided to get a little creative this year! I don't think any words will do this justice, but let me just say from our house to yours... We Wish you a Merry Christmas, and hope this brings a little Christmas Cheer!!! Love the Finks
Posted by Finkleas at 12:18 PM 7 comments

Our little baby girl is almost 8 months old!!!! AAAHHHHH!!! I can't believe it! We love her to pieces, the novelty has not worn off for all of us! I just know she is going to be a turkey! She makes one little squeak, and Payton, Jaxon or Ashton are at her rescue! When I took these pictures she was barely sitting up, tonight... she crawled for the first time, which means GATES! There is a lot to get into and a big set of stairs. She has 5 teeth with one on it's way! AND SHE IS CRANKY!!! But her cranky is nothing! She is such a good baby!(for me! ;)) She seems to be a momma's girl! Go figure... like she ever sees her Daddy!

Posted by Finkleas at 7:44 PM 3 comments

We absolutely love where we are! It is so gorgeous where we live! There are so many things to do and see. Summer was fantastic, Fall was great, and Winter so far has proven to be just as fabulous! Last Saturday we went to one of the local Christmas Parades. It was freezing! But we had a great time freezing our tootsies off!

Posted by Finkleas at 7:41 PM 1 comments

I knew before coming to Michigan that there were going to be a lot of trees, however, I don't think I ever considered the amount of raking that had to be done. Here are a few fun pictures of the kids running into the huge pile. Take note: this was one of probably 50 times that I raked.
I enjoy being outside doing yard work with the kids, so I had been the one mostly doing the leaves. It would take me hours, and hours. One Saturday we had so many leaves that I think our land lord must have driven by and seen that we may need some help and planned to come that afternoon. Austin was didn't want him thinking we were total slackers so he got out there early that day with the boys and started raking... only to break it. Our only tool for leaves! Lets just say he was quick to replace it with something else that didn't require so much energy. I want to say maybe he broke it on purpose just so he could get a blower. It is December 8th, and we still have leaves that haven't fallen. And yes... it is December 8th and has not snowed in MICHIGAN!!! CAN'T BELIEVE IT!

Posted by Finkleas at 7:34 PM 1 comments

Time has escaped me! I can't believe we have been in Michigan for 7 months! CRAZY! Since school has started for Payton and Jaxon life has been a little crazy.
Tonight we had a great time at the Jeffers Christmas Concert! Our two kiddos did an amazing job with all of their songs and actions. They both really got into it! Sure made us smile. Jaxon made us laugh hysterically with all his antics, he is definitely a class clown. Payton made me so proud... she reminded me of how much I used to love being in choir. I wished I had a better video camera where I could have filmed them.
Jaxon had to dress up in Christmas P.J.'s, in the picture you will find him on the front row in green pants and a red shirt. After he was done I went to get him from the band room, and his teacher took him aside and gave him little gift. His Tennessee Christmas hat he is wearing!!! He absolutely adores her, I think she is pretty fond of him too!
Payton's concert was themed around Penguins. She looked beautiful!

Posted by Finkleas at 7:20 PM 2 comments

August 6th is when we celebrated Payton's birthday! It was a saturday and lots of fun things going on. We were about to make our way down to the Coast Guard Festival when it started raining. So... we came to the conclusion that with the humidity and 4 small kids, plus another family with 3 small kids... that wouldn't be much fun. We decided to wait it out and may be go later that day. We have found that weather changes pretty quickly here. You never know what will happen.
We called our friends the Miltgens and informed them of our changes and met up at Chuck E. Cheese's. Which turned out nicely. Hardly anyone was there... by the time we were ready to leave, it started filling up.
Here are some pictures of Bryton while were were waiting for our friends to show up.

We ordered Pizza and Drinks, and had so many coins the Daddys HAD to go and use some of them. They claimed "we are doing it for the children, they need all the tickets they can get!" They are only thinking of the kids!!!

The Kids got to dance with Chuck E. It was hilarious watching them. Especially Jaxon... I seriously have no idea where he comes up with his moves. They are great!

The weather cleared, it was extremely humid though! Here is Payton at the Carnival.

All the blankets laid out for the Fireworks. They are bigger than 4th of July apparently. (We wouldn't know, 4 small kids staying up til 12 pm. NOT GOOD)

We got in line to go and tour the big ship. But they had just closed it until 6 pm. Our kids were almost at their limit, so we left. Next year for sure though.

Ashton at the Carnival, and of course he wants to ride the 4 wheelers.

Payt and Jax go for the Roller Coaster.

Sunday was pretty low key. Payton chose what she wanted for her dinner which was Salsa Chicken ( a Finklea Kid Favorite) And we had some friends over to have cake. She was a little disappointed that she didn't get to open any presents this year on her birthday, but she had her entire room re decorated! And she wanted to come shopping with me.
Here we are singing Happy Birthday to Payt, we got a kick out of Bryton... she was singing too!

On a more serious note... These last seven years I have had the privilege of being the mother of one of the sweetest little girls. I can't imagine my life with out her. She is amazing! She is the greatest big sister to her 3 siblings. She is so great at helping me and doing kind things for both me and her Dad. I am often looked at a little bit CRAZY for being as young as I am and having 4 kids. I wouldn't change it for the world. They are my world! I love Payton more than words can express. She is such a joy to have in our family. I couldn't have asked for a better OLDEST CHILD. I look forward to spending eternity with this special little girl!
Posted by Finkleas at 8:19 AM 3 comments